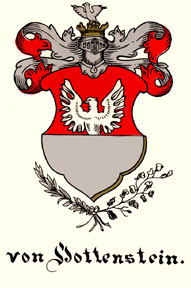 According to family tradition, the name Hottenstein means, in the old German language, a holy stone or rock, and is derived from a hill in the Spessard Forest in Germany where in the year 380 AD, a Frankish Province Count Riedbold von Hottenstein held annually a great solemn court upon a large rock, under a powerful oak tree. His coat of arms contained two fields, one white and the other red, signifying wisdom, impartiality and strict justice. In the red field, as well as upon the helmet, was fixed a white falcon, indicating courage and eagerness for battle, and besides this a count's crown (History of the Hottenstein Family, William Hottenstein, 1878) .

The town of Langenholzen, Germany has a centuries old stone in their town called The Hottenstein, and they have a picture and description (in German) on their web page. It is described in German as a flat limestone rock, which in pre-Christian times was used as an altar, and then later as a Thingstein (translation unknown) . While at this point no connection has been established between the Hottenstein family and this rock, the coincidence is striking. Hottenstein Book Publishers (in German) in Alfred, Germany takes its name from this stone.

There is also a town called Hottenstein in Germany located in the current modern city of Wuppertal (in German) between the main city and Nackstebreck. Once a small village, it has been swallowed up by the surrounding towns and cities. While not shown on any map, the town is marked at several locations as such, and the locals still refer to is as Hottenstein. One of the main landmarks in this village is the Hottenstein Church (in German).

The Hottenstein family continues to live in Germany and Switzerland, however, today there are only a small number of people with that name still living in Europe. 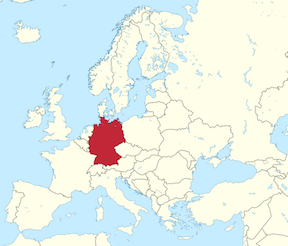 Today there are probably more people with the name Hottenstein living in America than in Germany with the largest concentration in Eastern Pennsylvania. The genealogy has been successfully traced back to just after the 30-year war in Germany (1618-1648), and four immigration lines have been established.